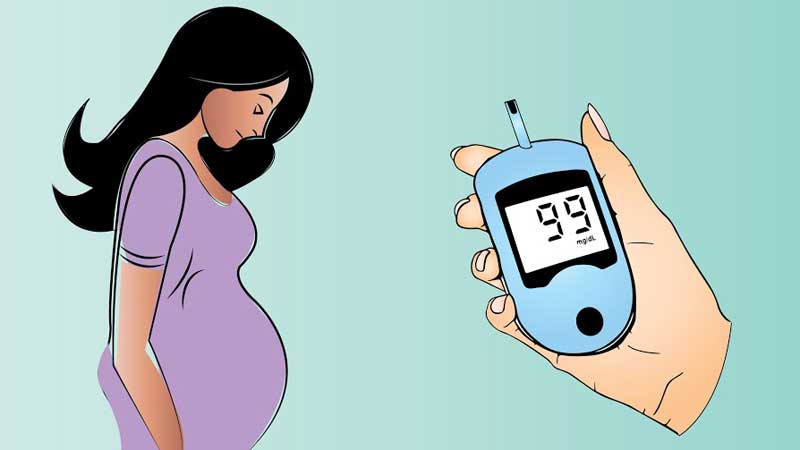 You may or may not have heard about it. But when you’re pregnant, you’re bound to hear about it, whether from your doctor as a precaution, or from the lab reports, putting you in the spot.

Nothing to get all worried about though. Let’s try and get some information on the topic.

What is gestational diabetes?

Untreated or poorly controlled diabetes can cause problems for you and your baby. Care should be taken to control blood sugar level. The good news is that gestational diabetes usually goes away after your baby is born. It is different from type 1 diabetes or type 2 diabetes, which last for lifetime.

Cause of gestational diabetes

Normally the level of glucose in your blood is maintained by the hormone called insulin. Insulin helps glucose to enter the cells of your body from the blood. When you are pregnant, the placenta produces hormones that block the action of insulin. This is known as insulin resistance. Insulin resistance makes it hard for your body to use insulin. To overcome this, your body needs to make as much as 3 times the normal amount of insulin. Usually, this is not a problem as the pancreas produces more insulin when needed.

Gestational diabetes develops when your body is no longer able to make and use all the insulin it needs for pregnancy. Without enough insulin, glucose cannot leave the blood and builds up in the blood to high levels.

How will I know if I have gestational diabetes?

The risk of developing gestational diabetes is high if you:

Although most of the time there are no symptoms for gestational diabetes, you should go to your doctor for a diabetes test if you:

Will gestational diabetes affect my baby or pregnancy?

If your diabetes is not treated or left poorly controlled, there is too much sugar in your blood. The sugar can cross the placenta and reach your baby. If you have too much sugar in your blood, the baby also gets too much sugar. To deal with the excess sugar, the pancreas of your baby also produces extra insulin to utilize the extra sugar. The extra sugar is converted into fat and is stored in your baby’s body. This would create a risk of him growing larger than normal – a condition known as ‘macrosomia’.

A large baby can make labor and birth more difficult – increasing the risk of serious birth problems like injury to the shoulder of your baby or your vagina. Also, because of large size of the baby, normal delivery sometimes doesn’t remain an option anymore, leaving cesarean section to be the only option for delivery. Gestational diabetes also increases the risk of developing hypertension (high blood pressure) and pre-eclampsia.

Because of the extra insulin made by the baby’s pancreas, your newborn may have very low blood glucose at birth. For this they are also at higher risk of developing breathing problems and jaundice. Babies with excess insulin have higher risk of becoming obese in their childhood and developing type 2 diabetes later in their adult life.

How is gestational diabetes treated?

If you have gestational diabetes, you will need to keep your blood glucose level under control. Your doctor or the specialist you see at the diabetic clinic will advise you on how to control your blood sugar levels by combining healthy eating with regular exercise.

If diet and exercise are not enough, medication may be needed to control your blood glucose level. Some women may take oral medications; others may need insulin.

Will I continue to have diabetes after my baby is born?

Usually, gestational diabetes goes away after birth. However, your doctor may check to see if you still have diabetes before you leave hospital. You'll also be offered a test for diabetes at your six-week postnatal checkup (PNC) visit.

If I've had gestational diabetes, will I get diabetes again?

If you've had gestational diabetes, you are more likely to develop type 2 diabetes later in life. Your doctor will advise you about sticking to a healthy diet, controlling your weight and exercise to help cut your chances of this happening.

Can I do anything to prevent gestational diabetes?

There is usually no guarantees that you can prevent, but you may be able to reduce the risk of getting gestational diabetes by following a few simple rules.

So, do I get worried or not?